English Nederlands
Quality Strings designs and fabricates bespoke bass strings for upright and grand pianos
Additionally the plain wire unisons can be improved by rescaling
Our proprietary method brings the entire scale into balance, producing a homogeneous sound
PIANIST magazine published this article on Quality Strings in may 2019
Back to the essence
With his company Quality Strings, Just Vrins designs and fabricates bespoke bass strings for upright and grand pianos. Additionally the plain wire unisons can be improved by rescaling. His starting point is a homogeneous sound. And how do you know, after new strings have been fitted, what the differences are compared to the old strings? To effectively make that comparison, Just Vrins developed a solution and the results are impressive.
photo: Sanja Harris
We meet Just Vrins in his workshop at his house in Beusichem, between meadows not far from Culemborg in the Netherlands. Outside there is a soothing peace, inside we are surrounded by a Blüthner grand, computers, keyboard and screens, and all kinds of tools, experiments and inventions. Six years ago Vrins took over the company from Barth Jan Kooy. "Very coincidentally, he was the father of my girlfriend at the time and had been in the business for thirty years. He mainly scaled and supplied custom bass strings. I was an independent interior builder, furniture maker and liked to work with my hands, but at first I had doubts whether I would find the work challenging enough."
Ultimately, the mix of scale calculations, software development, graphs and analyzes, sound technology and very precise work down to a hundredth of a millimeter turned out to fit perfectionist Vrins very well. "At the Design Academy I took the Essentials course. I like to go back to the essence, where innovations arise. And with the piano, the vibrating string is the essence."
Barenboim
For tuners, who have to replace individual strings, he has developed a unique string configurator, with which customized strings with any finish can be ordered directly online even on a smartphone.
But especially restorers and builders, who usually need complete (re)stringing, know how to find Quality Strings. For example, Vrins was asked to design and deliver the bass strings for the Barenboim grand that Chris Maene built. "That was a privilege. For those pianos brass-wound bass strings were selected, their specific sound suits the transparency of straight strung instruments very well." Every Maene piano is equipped with brass wound bass strings from his hand.
Blueprint
"Using a paper pattern, a blueprint of the instrument, I measure all speaking lengths and use our proprietary software to design the ideal scale with the right materials and optimum dimensions. Traditionally the focus here is on reducing inharmonicity, the extent to which the audible overtones deviate from the natural overtones, which are a multiple of the fundamental. Lowering the inharmonicity makes tuning a little easier, but we should not overestimate its importance. "
Here Vrins developed something new: "Due to an excess of attention to reducing inharmonicity, other parameters inevitably fall out of balance. The most important of these is how the volume of a tone develops from keystroke to decay. Irregularities there impact playablility greatly, and have to be compensated through voicing. My proposition is: make sure things are optimized at the core and create a string plane that is in itself balanced. This results in a homogeneous sound and less need to compensate tonal differences through voicing." 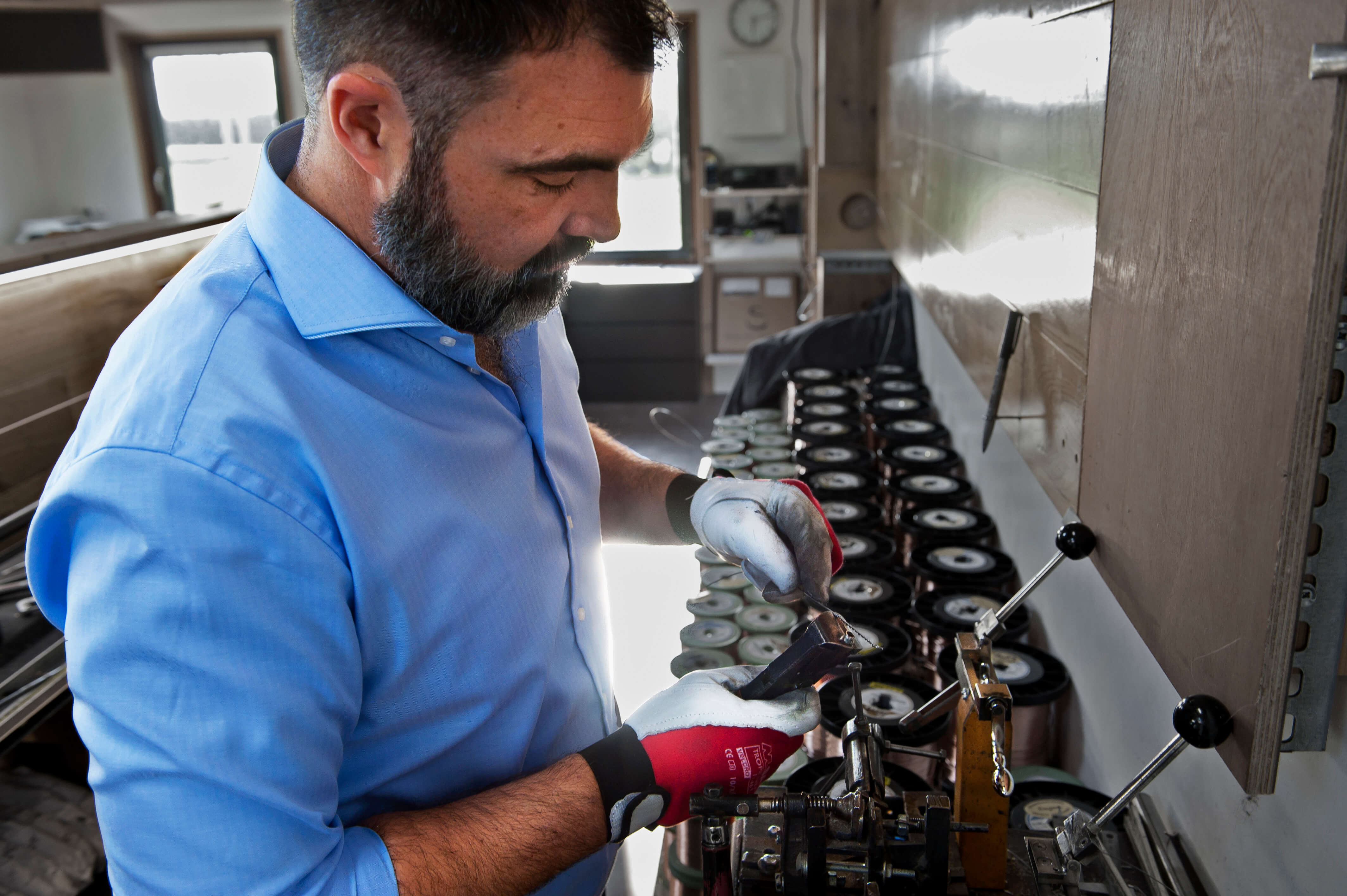 photo: Sanja Harris
Objectivety
To make the effects of a new scale audible, Vrins came up with something special. For an objective comparison, he makes recordings of each individual tone during the various stages of a restoration. "This must be done under exactly the same circumstances, of course. Starting with the key strike. " He shows a bar with a hole above each key through which a pin is pushed onto a key with the same force using an electromagnet. In this way a constant key strike is guaranteed. He also uses highly accurate measurement microphones and recording equipment. All positions and settings of the microphones, preamps and software are noted and precisely reconstructed for every recording. In this way the sound is accurately recorded in identical conditions at the various stages of, for example, the restoration of a grand piano. The recordings can then be compared and analyzed.
As an example, he plays recordings of a 2002 Yamaha C5 grand, at three stages. First with the original strings and used hammer heads, secondly with Quality Strings and used hammer heads and thirdly with Quality Strings and new hammer heads, without any voicing. Just Vrins: "Recordings can be compared on our website by the time this article is published." (go to Listen and Compare)
In the third recording, with the new Quality Strings, the sound is remarkably more open, fuller and calmer. It is amazing how much difference rescaled new strings can make. On the website www.qualitystrings.com there is a lot of documentation, strings can be ordered directly oonline and you visitors can listen to the results of recent tests.
Eric Schoones
Order Individual Strings Order Complete Set Listen and Compare